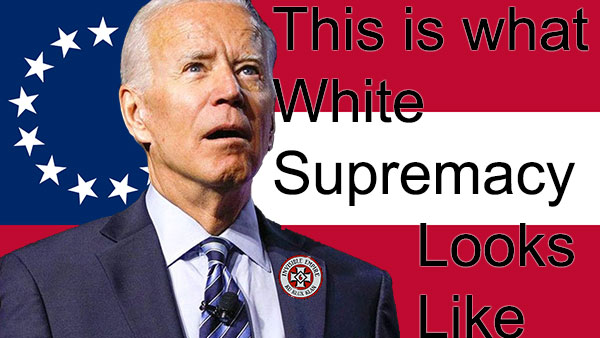 Cornpop is right, domestic terrorism, white supremacy is the biggest threat to this country, after all, he should know, he is the very person, thing, institution, his very existence all his life has been one of white supremacy. 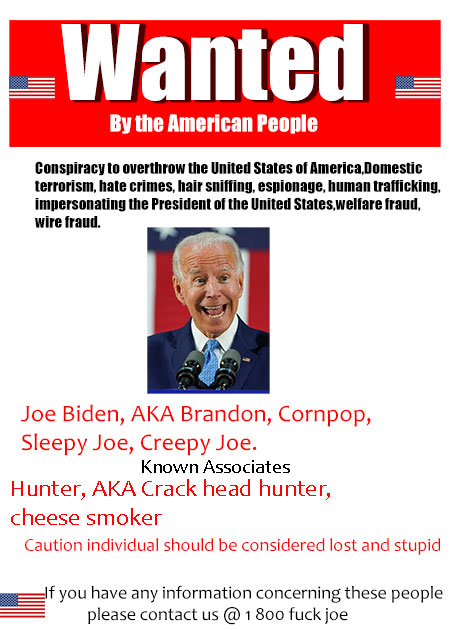 What did he say the other day, something like you either stand with Martin Luthur Kink or Jefferson Davis?  I mean the mother fucker, Joe KKK Biden voted to give Davis back his citizenship, google it and learn something, and now the cocksucker wants to say if we are against whatever the king says then we stand with Davis?

Motherfucker you voted to give him back his fucking citizenship, I think it’s officially on the record whose side you stand with.

He gave a eulogy for a KKK grand wizard, or whatever the fuck he was, does it really matter what the fucking title was?

Yes that is Manchin but I’ll give him this, look at his face, his eyes, his smile, he had no choice but to be standing there if he wanted the Dem money and the DNC behind him.  I can cut him a little slack on it as that’s the problem with politics until we fix that it doesn’t get fixed. 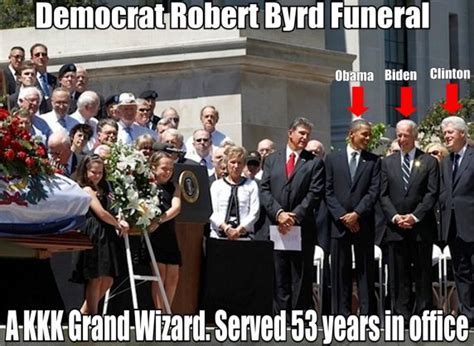 How could Obama as a black man attend this man’s funeral, but you see the whole DNC powerhouse was there, Manchin had no choice but still right.

If you were a man of principle you would not have attended his funeral, that’s like a Jewish person going to a Nazi’s funeral.  Unless you were going to piss and spit in his coffin and grave, just to make sure he was dead and going in the grand than dancing on his grave knowing he’s going straight to hell.

No shame, that’s the kind of person that should be buried in the middle of the night so we cant see it.

So get this, if you and I are against the nazis they aren’t we the real enemy of the nazis?  What do you think Hitler was telling the Germans?  The same shit KKK Biden is trying to tell us except he’s whispering lol, he did scream a little the other day and pound the podium, imagine if Trump gave that speech and pounded the podium, he’d be getting impeached already.

We see right through you.

This guy is telling us the truth from all his little remarks, this is the kind of good ole southern boy the southerners know is no fucking good.

Let us not forget he said he decided to run after Chartolits view when he saw what people with torches he said, I’m sure he did decide to run then reminding him of a bygone error that was actually within reach for them to achieve once and for all legally.

He’s hiding in plain sight for years, pulled the wool over your eyes, the whole system has in their perspective ways to both sides and all people but you got to love the way the Dems fuck over their own people.  It’s a slap and tickle for sure, a straight abusive relationship that if now get this.

If the Dems and the way they treated their constituents were let’s say a couple, wouldn’t the part of the couple that would be represented by the Dems, they would be arrested on domestic abuse, rape, slavery, the list goes on and on, they would get arrested and convicted but instead, they sit there and tell you every reason why it’s your fault you got punched in the face.

That’s the problem we, you and I do not look at Govt spending that way but that’s exactly what they are doing to us.

Pay attention to his words, the words of the whole party they are not lying, can I as a white man ask one question?  Am I even allowed to ask questions anymore? I see big cities controlled by Dems and many black and brown politicians then why are they shit? How is it your still oppressed even from business when at this point you have more control so who is oppressing who?

Maybe they are telling the truth it’s just about them.  As Joe said, they want to keep you in chains, he’s not lying.  Didn’t the old southerners use to threaten black people to vote for how and how who they wanted?  How is it when you say you ain’t black if you don’t vote for me, not a threat?

It’s part of their game, the nazis had jews that helped them and the Dems have their own version and they look like Nancy Pelosi, the Cuomos, Maxine Waters, Al Sharpton, Joy Reid, you get the hint, you can just throw a dart you’ll hit one.

Let us not forget the wizard behind the curtain is Soros, who helped the Nazis when he was a boy.

Wake the fuck up you woke gullible naive sheep. 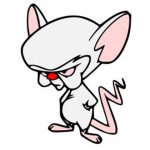 Published in Conspiracy and Rants and raves